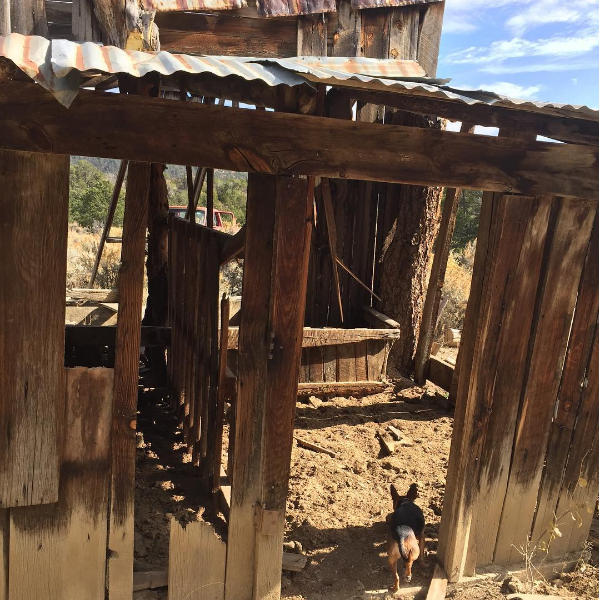 It was a Sunday morning around 7am. The gate rattled. A mile and a half away from the pavement on a dead end 4-wheel-drive road, we were just coming out of our nightly slumber.

It had been three months since moving into the yurt and we were sure to expect some unsuspecting visitors who were more familiar with our place than we were. I heard the intruders first and Ben lit up in action to put on pants and grab the pistol.

As he snaked his way up the path toward the gate, I put on some clothes and quickly retrieved the little .22 that I first shot with my dad in our old Colorado backyard. I watched him from behind the trees and listened in…

He questioned the visitors – two rough-looking men standing outside of the green Chevy pick-up, the driver with one hand on the gate and the other holding a can of Bud Light. The passenger, watching warily by at the hood of the truck, coddled his own beer.

“What are you doing?” Ben asked over the gate with an authoritive tone and posture that emphasized the accompaniment of his sidearm.

“Oh! We were just out 4-wheeling and got lost,” said the driver in a slowly slurred accent with his arms raised, moving closer to the truck door. “We’re out drinking beer all night and took a wrong turn,” he said in a shabby half-smile.

Both men climbed into the truck with their blue cans and the driver tried to reverse. The passenger got out to put the hubs in so they could roll out in 4-wheel drive, and they lumbered on back down the road.

Ben and I hung back for about a 30 minutes to make sure all was clear before we went to see his mom in town who was staying at the B&B that weekend. It was a great way to start the day and gave us a dramatic tale to share over breakfast!

Since then, we’ve had a few more visitors rattle the gate, but most have been friends and neighbors showing up unannounced. The others are the subject of another story yet to be written…

Do you have any stories of unexpected guests – good or bad – to share? Tell us how you answered the door in the comments below. Thanks for reading and sharing!!